We have an APB – All Points Bulletin – out for “The Liar” and her accomplice “Fraidy Kat”.

BE ON the LOOKOUT THEY ARE IN YOUR HEAD!

Your emotions are telling you that other people don’t like you and your boss thinks you’re an IDOIT!

When you try to “appease” your emotions, you actually create the dislike and mistrust that your emotions are telling you exists!

To regain control you need to apprehend the

“What IF” Sisters:
“Miss Emotions” and “Fraidy Kat” 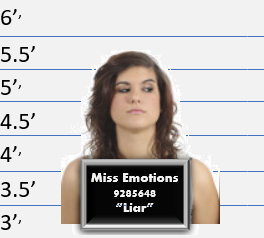 You’ll find Liar first.  She’s the bravest of the two.  She sneeks up to you and starts to whisper LIES about what other’s think of you.

GRILL HER – like she’s a suspect in a police investigation

Who said she doesn’t like me?  When? And don’t give me any of that “well it looked like or I saw a raised eyebrow” crap!  I want the truth and evidence or you’re just a LIAR!! 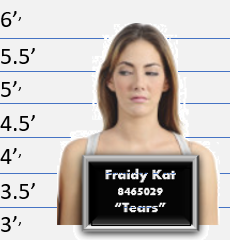 Find her accomplice – Fraidy Kat aka “Tears”, She’s always lurking close by and building your FEAR to paralyzing proportions.  GRILL HER Too!

What are you worried about?  Why do you need to be worried?  What happened and don’t tell me again about what MIGHT happen…if it didn’t actually happen, it’s not REAL.

Once you’ve got their stories straight …THEN you can decide if you have a REAL reason to be Worried.  Until then…Stop believing the Lies and fears they are feeding you!  Get out there and take that NEXT STEP!  Like you MEAN IT!

We have an APB – All Points Bulletin – out for “The Liar” and her accomplice “Fraidy Kat”.  They are Dangerous to your Confidence and must be STOP. They STEAL your JOY and SUCCESS!

Be Inspired, Empowered and Impacted as Pamela Burks motivates and challenges audiences to have clear goal focus, empowered actions, revealed inner strength, confidence and encouragement to step UP to the lifestyle they desire. Do infinitely more than you think you can and BE your BEST YOU!